The Corenthal Report found in Box 5 contains information on Fairmount Jeffrey and the fate of his family in Centralia.

RE: Patient JEFFREY [REDACTED] and the "Mining Town Four"

Roberts, you know I am the first to admit when I have done wrong and this is just such an occasion. I must apologize for my prior hesitation concerning the admissions from the Pennsylvania fires. Last month, I provided a brief report on another patient that you and I each know very well, Evan, and I must say that the progress shown has been consistent with the amount of contact he has held with the other children from his hometown. Although I expressed doubts concerning his overall health and still do not think it would be wise to fully discharge any of these children, their relationship and various friendships have been incredibly beneficial to their eventual rehabilitation.

However, one of the children in my care, Jeffrey [REDACTED], is having a particularly difficult time acclimating to the home's routine schedule and cannot break himself from this dream that we have discussed a few times since his admission. It is quite apparent that these night-terrors are stemming from a traumatic incident and, when he describes the dream, it is quite clear that it has to do with the very violent fate that the rest of his family met back in Pennsylvania.

"I'm sorry to bother you again, Doctor. I wouldn't want to worry you, but they said I had to talk to you because of my screaming. Yeah, when we were sleeping. Vinnie and Stephie tried to help me when I woke up, but the others weren't happy. They were yelling and cursing at us. Evan eventually woke up too. They called us all bad names, Doctor. ... ... Oh, the dream? yeah, it was about Mommie and Ellie again ... ... Okay, Doctor. Oh, yeah. daddy was there, too. I remember going to his funeral, Doctor; why was he in my dream? I have a little rose blossom from his funeral wreath. It's in my old room. ... ... [His family's house was lost in the town's fires, he obviously doesn't recall or blocks it out.] Never mind. Yes, the dream. You probably remember how it goes. It was last Christmas, again, and we were siting in the living room. Ellie's only... or was, only a few years old [sic] than me. I wanted to be just like her, Doctor. She was so smart. She was going to go to college one day. [I mentioned a few possible fields that she may have wanted to go into.] No, I don't think she wanted to be a nurse. I don't really remember. She was good at everything in school. She was writing something in a diary that Grandma had sent her for the holidays. No, Grandma wasn't there. She lived far away so she mailed us our gifts every year. She was awesome though, Doctor. She sent me a little red truck. I was picking up deliveries near the fireplace and the bed of the truck popped off. I was trying to click it back together when I heard the kitchen door open. Mom stood up, she was sitting with Ellie, looking at her writing. They were smiling and Ellie was describing something. Mommy wasn't smiling anymore. She goes away from us. In the kitchen, I hear this horribly loud BANG. Something fell on the floor. Daddy comes into the living room and looks at the Christmas tree, then at me and Ellie. He's smiling. he was just hunting, because he has this shotgun and is covered in chunks of some dead animal [The blood of his mother, Roberts.] He tells us "Merry Christmas, lovies," and puts the barrel of his gun to the back of Ellie's head. Before she can say anything he pulls the trigger. He walks over to me and kneels down to my face. He clicks the bed of the truck back together and hands it to me. "I love you, Jeffrey," he whispers and kisses my forehead. I take my truck and place it on the ledge of the fireplace. "Daddy... why did you do that to Ellie?" I pointed to the hole in Ellie's face. Daddy walked over to the Christmas tree and touched my favorite ornament, a little toy wooden soldier that he and I made over the summer. He taught me how to carve figures using his old knife and I was so excited that he let me use a small piece of firewood we had collected for the winter to make a soldier for this year's tree. He bought some paints at the store in town and we painted it together. ... ... ... (I asked the boy, "Jeffrey, what happened next? You stopped telling me about the dream.") ... ... Oh, yeah. Yeah, Doctor. He stopped looking at the ornament and looked back at me. "Son... the Man made me do it." He put the shotgun's tip into his mouth and I hear the BANG again. I wake up and everyone's telling me to stop screaming. Vinnie and Stephie were holding my hand. They weren't telling me to stop. They were trying to help me."

These night terrors have fortunately cut down to about twice a week at this point, Roberts. This is much better news than when the boy first had arrived (and wasn't that a most splendid week?). Obviously, these relationships that he has developed within the hospital have been serving to help speed up his recovery. I have put in a request to move the children from their standard sleeping accommodations in the common hall to a new partitioned area. I want to try something, Roberts. They are each lacking a true parental figure at this point; I think that may be all they may need. 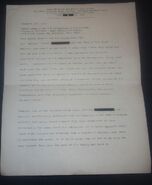 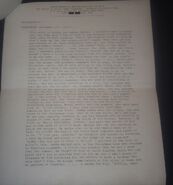 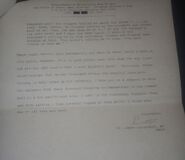 Add a photo to this gallery

Cite error: <ref> tags exist, but no <references/> tag was found
Retrieved from "https://everymanhybrid.fandom.com/wiki/Corenthal_Report_dated_12-14-1971?oldid=20409"
Community content is available under CC-BY-SA unless otherwise noted.